Summer is the best season to catch up - on sleep, vacation days, time with family and friends, and especially the pile of books collected over the last year.  Whether you’re actually travelling or just have some down time at home, a good story has the ability to take you a thousand different places and times.

In the spirit of sharing great stories, we asked our teachers and staff for their favorite reads. Here’s what they shared, should you need inspiration for your next library visit or another book to add to the pile.

Anne of Green Gables by L.M. Montgomery
“I LOVE the Anne of Green Gables series. I'm reading those books again this summer, and I'm always reminded of how wholesome and well-written they are. Good stories, impactful life lessons, compelling characters, and moments that will make you weep both tears of sadness and tears of laughter.”
-- Jenny Bopp, Advancement Services

Kitchens of the Great Midwest by J. Ryan Stradal
“The narrative uses food as a backdrop to weave together quirky characters, family relationships, and community. A quick read that leaves one thinking about strength of the human spirit.”
-- Lisa Cromley, Middle School English teacher

The Boys in the Boat by Daniel J. Brown
Following on the heels of Unbroken, this is an account of the American rowing team at the 1936 Berlin Olympics. Brown draws from the journals and memories of the rowers, as well as the writings of the time to craft his book. What results is the fully-formed images of these athletes, as men and competitors, and of a world about to turn on its head for the second time in almost forty years.
“Page turner! Loved the story of all these young men and the adversity they had to overcome.”
-- Margaret Haviland, Assistant Head for Faculty and Program

All American Boys by Jason Reynolds and Brendan Kiely
"This is a gripping and heart-wrenching novel that focuses on one incident but is told from the perspectives of a white boy and a black boy growing up in the same town. The book, written for young adults, has won multiple awards and is a great one to read with your tween/teen (some language and violence) to talk about the Black Lives Matter movement, racial profiling, and police brutality."
-- Abigail Lausch, Middle School English teacher

Between the World and Me by Ta-Nehisi Coates
Coates’ writing, featured in The Atlantic magazine and on NPR, has been a document of the unsettlement of American race relations and deep roots of the factors contributing to it. This memoir is a culmination of this research and observation, where Coates speaks as a black man, writer, Baltimore-native, and father. At once touching and startling, Between the World and Me treats one of the most difficult questions and conflicts of our time with care, but does not trick its readers into hoping for a silver-bullet solution.
“This is a powerful memoir and narrative of the intersection of experiences of race, gender, and identity in the United States.  It is simultaneously both difficult to read and hard to put down.”
-- Celeste Payne, Upper School Biology teacher

Fledgling by Octavia Butler
Butler’s final novel, Fledgling, begins with a young girl fighting through amnesia, and trying to understand her many strange abilities and needs. With revelation after revelation, Butler brings depth and life to her character, as their reality and life to that point unfolds before them.
“A great sci-fi book with a black female protagonist. Fast paced and creative. I love the way Butler tells a story.”
-- Marissa Colston, Director of Diversity and Inclusion

Heat & Light  by Jennifer Haigh
Set in the fictional coal town of Bakerton, Pennsylvania, the latest of Haigh’s novels illustrates the conflict between what is good for a town and what is good for a country. Having learned that Bakerton sits atop Marcellus Shale - one of the largest deposits of natural gas - the townspeople are presented with the question: to drill or not to drill?
This novel “has great (flawed, some likable, some not-so-likable) characters who develop slowly over time, although the book does not move slowly. I highly recommend everything she has written to date.”
-- Linda McGuire, Dean of Students

The Doomsday Book  by Connie Willis
“It's a mix of sci-fi and historical fiction. The scientists of Oxford University have figured out how to do time travel and have started a program where they send historians back to the time periods they study. The historian in this book goes back to the Middle Ages but something goes slightly wrong and she ends up in the middle of a small English village during the plague years! It's fascinating!”
-- Ellen Abbott, Upper School English teacher

The Rosie Project by Graeme Simsion
“This book is about a genetics professor who is socially awkward/challenged. He meets a woman named Rosie and attempts to have a relationship with her. I was both moved and entertained by his journey.  The sequel, The Rosie Effect, is also a good read.”
-- Carolyn Hapeman, Chief Financial Officer

TransAtlantic by Colum McCann
McCann’s novel spans two centuries and two continents to intertwine three important crossings of the Atlantic Ocean. He brings Frederick Douglas, the first transatlantic flight and the 1998 Belfast peace talks into one timeline with a family history that crossed paths with each.
“From the opening description of the British pilots making the first transatlantic flight to Ireland, to the story of Frederick Douglas' 1845 visit, to the account of Senator George Mitchell's mediation efforts, you are transported in the intricately interwoven plot of this brilliant novel.”
-- John Baird, Head of School

My personal recommendation is The Moor's Account by Laila Lalami, her most recent novel. This is a semi-fictional account of a doomed Spanish exploration party in Florida, then thought to be an island filled with gold. Only four men survived, one of whom was a North African slave. The account is written through his eyes, by Lalami's intensive research. What results is stunningly beautiful fiction that lends a very different perspective on how the clash of North American and European cultures played out.

This is just a smattering of the many, many great books out there waiting to be read. If you can’t pick just one - maybe from this list, maybe from another - you can always trust the reviews of your librarians. I’m sure they’d love to help you decide.

Got a book you love? Share it in the comments below. 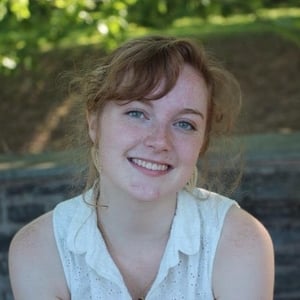 Caroline Eddy is a current summer intern at Westtown School, and a member of the class of 2015. She loves spending free time reading, gardening, knitting sweaters, and writing the books she wishes were already on her shelves. Caroline will begin her sophomore year at the University of Pittsburgh in September, continuing to work towards degrees in Journalism, World History, and Eastern European Studies. She currently writes for HerCampus Pitt, and hopes to study abroad in Scotland next spring.